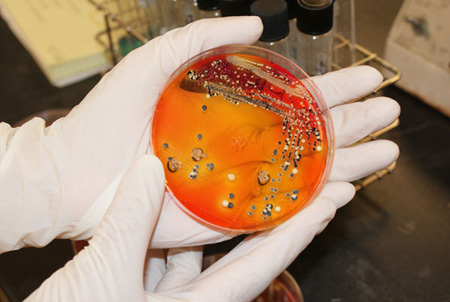 Contamination of food with various substances causes illness for millions of people each year.
Most often contaminated fruits and vegetables that are not washed thoroughly before consumption, but other foods are at risk.Foods that can harm

The problem is that often dark green leafy vegetables are eaten raw. Sometimes their contamination occurs even inside the house. Make sure you do not wash raw vegetables and meat in the same container or the same utensils and do not keep them in the same place in the refrigerator. In addition, before use, wash and rinse well as leaves of spinach, lettuce and other vegetables that you eat raw.

Ice may be contaminated with salmonella and staphylococcus bacteria. If soft cheeses such as feta, brie or camembert, there are 20% higher probability of being present listeria. Hard cheeses such as cheddar and Asiago are usually pasteurized and can be consumed safely, even by pregnant women.