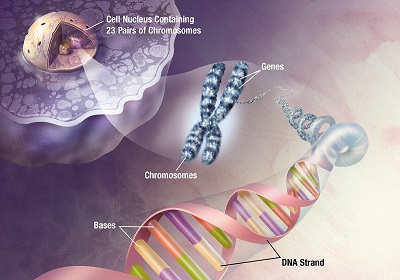 The new genes associated with Alzheimer’s

An international team of researchers from the Institute for Human Genomics at the University of Medicine in Miami, USA, analyzed the genetic data collected from more than 25,500 Alzheimer’s patients and more than 49,000 healthy individuals from 15 countries.

The research led to the discovery of 11 new genes associated with predisposition to the development of definite Alzheimer’s disease, in addition to those already identified in the medical world . Scientists have identified 13 genes that still need further investigation , which may be involved in triggering the degenerative neurological disease .

The findings provide a broader overview of the genetic factors that contribute to the onset of Alzheimer’s , and a better understanding of the disease, seen from new angles . These new perceptions include the immune system, which could be a key factor in the onset of neurodegenerative diseases, which include sclerosis or Parkinson syndrome .

Many new genes believed with certainty that would be involved in the development of Alzheimer’s disease confirm already known biological processes of the disease . Moreover , one of these genes was confirmed as part of the genome that play a crucial role in immune and inflammatory responses .

The discovery suggests that diseases shows an abnormal accumulation of proteins in the brain (Alzheimer’s disease , Parkinson’s disease or multiple sclerosis ) may have a common mechanism , which once known , can help develop a more effective treatment .

Although there is a rare form of Alzheimer’s disease that occurs before age 65, the most common types of the syndrome begins after this age . The most common gene associated with Alzheimer’s is called apolipoprotein E ( APOE ) .

This protein has three main forms

Thus, people who inherit one APOE gene from the mother and one from the father , are born with two copies of the APOE gene . Presence in the DNA of at least one gene APOE e4 significantly increase the risk of developing Alzheimer’s disease . If two genes are inherited APOE e4 , disease risk is even higher .
Important to remember is that not all persons carrying the APOE e4 gene develop Alzheimer’s disease . Even if sidromul occurs in most cases among patients with APOE e4 , it is only considered a risk factor and not the actual cause , participating along with other environmental factors to disease .
As research on the genetics of Alzheimer’s disease progresses , scientists discovered new links between disease occurs after the age of 65 and many other genes in the genetic code . The most important of them are

As if APOE gene , the above are considered risk factors, not direct causes of degenerative neurological disease . In other words , the presence of several variations of these genes ( one or more ) may increase susceptibility to Alzheimer’s disease, but not a certainty about the occurrence of the syndrome.

Most medical experts do not recommend genetic testing for late onset Alzheimer’s disease (after 65 years), but they may be necessary in the event of symptoms syndrome with early (before age 65).

If the APOE gene, for example, the simple determination of presence in the genetic code does not say whether the disease will develop or not. Moreover, some people who have the gene APOE e4 in DNA develop Alzheimer’s disease, as a significant number of people with this gene do not get sick of this form of dementia. For this reason, doctors discourage genetic testing for APOE genotype, because the results are difficult to interpret.

Health professionals say that, before performing a genetic testing in this regard, it is crucial to be considered the emotional consequences of ownership of information involved. The results can affect eligibility for certain forms of insurance, such as disability, long term care and life insurance.

Doctors can diagnose early Alzheimer’s disease, the first symptoms, without any prior genetic testing in patient medical records.