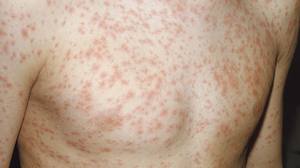 Measles is an infectious disease of viral etiology, highly contagious, sometimes severe, caused by measles virus, characterized by high fever, cough, and runny nose and rash. This is one of eruptive diseases, contagious childhood. The disease is most severe in infants and young children with pulmonary complications and mortality quite high. Monthly and seasonal curve shows a peak incidence of measles in the spring months (April-May) and a minimum in August and September. Sources of infection are formed only by the sick man with typical or atypical forms of the disease, there are healthy virus carriers. Patient sneezes and runny nose shows mucopurulent has laryngitis voice rough and hoarse, dry cough troublesome or acute tracheobronchitis.

Mode of transmission
Transmission is airborne (by air), by droplets of saliva, nasopharyngeal secretions and conjunctival, which remain suspended in the air, is contagious up to two hours after the subject left the room contagious or other enclosed space. The patient is contagious four days before and after the onset of rash. Disease transmission is direct contact with the sick person through droplets released into the air in nasopharyngeal secretions around the patient, indirect transmission through contaminated objects with secretions from the patient is possible, but more rare – high infectiousness 4-5 days before and 6 days after the rash appears.

Symptoms
Begins with flu-like symptoms such as fever, coughing, sneezing, conjunctivitis. Koplik characteristic signs of the disease (the lining of the cheek, near the molars, small dots appear white, resembling grains of semolina). After several days a rash appears, first on the face, then on the trunk and limbs. At first neck is red spots sometimes intense congestive bleeding tongue is red around the edges with a tendency to desquamation. Digestive disturbances occur with vomiting, diarrhea, abdominal pain that can even simulate appendicitis. Nerve symptoms are: malaise, irritability, headache with severe general condition, especially in adults. Another symptom is swollen lymph nodes, which are slightly increased.

Evolution
Incubation is approximately 10 days. Invasion period (period catarrhal or preeruptia) takes 3-4 days before the rash appears, the onset is gradual, with fever gradually increases reaching 39-40C, headache, malaise, conjunctival catarrh (eyes bloodshot and red, with swollen eyelids , photophobia), nasal catarrh (sneezing, watery rhinorrhea abundance) and red spots centered white spots on the buccal mucosa in the right molars (like grains of semolina, sign Koplik). Then comes the period rash starts on the face and neck and generalized throughout the body and limbs in 3 days.
During eruptive – measles rash usually occurs at night, the first papules (spots) appear BTE and the neck, forehead and cheeks and then descending to the neck, and the next day the rash spreads to the chest and limbs of generalization in the root third day. The rash consists of macules pressure congestive disappearing pink, at first small then larger toothed edges, slightly raised papules and velvety to the touch usually confluence, leaving healthy skin. After 2-3 days eruptive elements diminish and disappear in the order they appeared, leaving behind yellowish-brown spots, followed by a fine desquamation, furfuracee.
Posteruptiva period in which the patient is recovering, is characterized by the disappearance of fever and eruptive elements. At this stage the patient is exposed to various complications: pneumonia, lung abscess or purulent pleurisy, seizures, side meningiene, measles encephalitis, multiple sclerosis, ocular diseases, tonsillitis, stomatitis, otitis media with effusion, myocarditis, gastroenteritis, appendicitis.
Complications occur mainly in young children. These may include: diarrhea (especially severe in infants), otitis media, pneumonia, encephalitis, death. Malnourished children with deficiencies of vitamin A, those whose immune system is affected (AIDS or other diseases) are the most vulnerable to complications. In Africa, measles is a major cause of blindnes

Treatment
Treatment of the disease is symptomatic and supportive: Antithermal to combat fever and hydration. Isolation is recommended at the first signs of disease up to 6 days after the rash appears. Also recommended disinfection and isolation of suspected sickroom Prevention specified. Severe complications of measles can be avoided with proper treatment that can save your child’s life. Nutrition and hydration is recommended to correct the child.
The most effective way to prevent measles vaccination measles before the age of 1 year. In many countries, measles vaccination is associated with the one against rubella and mumps (mumps).s (blindness). Measles lowers the body’s defenses so that subsequent microbial infections can take serious forms.