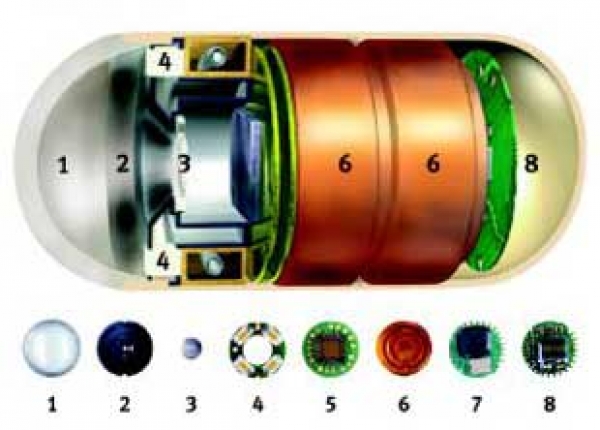 Videocapsula endoscopic investigation is an innovative method of digestive tract and sometimes replaced successfully completing the procedure unpleasant and painful digestive endoscopy classic.Gastrointestinal endoscopic exploration concept is very new videocapsulei using medical terms, its performance is concomitant with the onset of 21 century. Depending on the tube investigated, videocapsula can be for: small intestine, colon and esophagus.

Videocapsula the small intestine
The main advantage of this is that it allows videocapsule as its name indicates, investigating small intestine, digestive tract inaccessible portion of the classical methods.
The size of an antibiotic (boxes), videocapsula the small intestine is equipped with a camera powered by a battery with a limited life – 8 hours. Once swallowed, it takes pictures with some regularity (2 frames / second) and transmits them to a recording system attached to the body of the person being investigated.
Among the pathologies which addresses this videocapsula, include: occult or obscure gastrointestinal bleeding (gastrointestinal bleeding identifiable microscopic laboratory methods or obvious in the feces, but no cause identified by conventional colonoscopy), chronic inflammatory bowel disease, gastrointestinal tumors, vascular pathology.

Videocapsula for colon
Videocapsula Unlike the small intestine, the colon is scheduled for 2 rooms that take 4 frames per second, but with a longer duration battery life of about 10 hours.
Since the targeted segment is located distal digestive tract, the capsule was so arranged as to take pictures in the first 3 minutes after ingestion, and later to reactivate in 1 hour and 45 minutes of ingestion. Videocapsula colon is indicated in case of ulcerative colitis, bleeding, diverticular disease of the colon or rectal lesions (hemorrhoidal disease, tumor lesions, rectal ulcer).

Videocapsula the esophagus
This videocapsula is suitable for investigating patients with esophageal pathology non stenosis: esophagitis, esophageal varices, mucosal metaplasia and Barrett’s esophagus. It requires a special protocol swallowing, lying down, so that the transit time through the esophagus to be extended enough. Videocapsula shows also 2 rooms investigating both upstream and downstream.
Endoscopic exploration procedure videocapsula, and this included the colon, have certain advantages, including: that does not mean colonoscopic examination discomfort, requires no anesthesia, eliminating additional risks, quality and resolution images and the ability to provide information on lesion size.

Contraindications
Contraindications method refer to: stenoses, occlusions and intestinal fistulas, as they can damage the capsule retention, presence of a pacemaker, cardioverter or other implantable electromagnetic device, swallowing disorders encountered in neurologic pathology (stroke, encephalopathy, progressive paralysis). If swallowing disorders, there are devices that allow videocapsulei insert directly into the small intestine through the flexible endoscope.
Pregnancy is not a contraindication per se, but the possible undesirable effects have not been studied and therefore recommend abstaining from this investigation. Regarding age limits, small bowel capsule is not recommended for children under 8 years due to digestive anatomy at this age, and the colon is not recommended because it requires teens under 18 patient compliance. Bear in mind that a medical examination is required before specialized programming for this investigation.