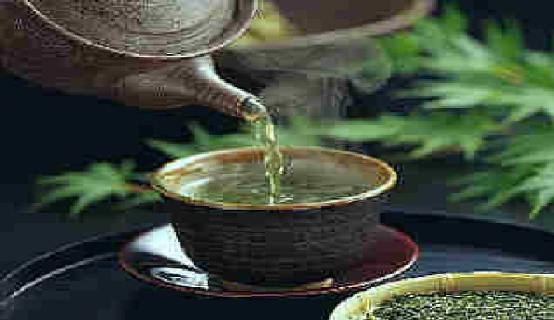 What are the benefits of drinking green tea. Green tea is the most popular type of tea in Japan and in several regions of China.
In recent years, green tea has gained notoriety in the West, thanks to the benefits they would bring health, according to several studies, such as important quantity that provides the body with antioxidants.

What is green tea
Green tea is made ​​from freshly picked herbs and made ​​preserved in a short time. If the tea leaves are allowed to oxidize after they are gathered, the green tea are heated to avoid the natural process of oxidation.
Therefore, green tea leaves are processed either by exposure to hot steam or dry heat (pan or oven). Therefore, green tea differs completely from other types of tea, such as black or white because the method of processing is special.

How to prepare green tea
Green tea lovers say that people who do not appreciate the taste of the drinks consumed , most likely , green tea prepared improperly. A common mistake in this process is infusing green tea leaves in boiling water . This temperature rise can use black tea , but not boiling water for preparing the green can give even the highest quality green tea leaves a bitter taste unpleasant.
The green tea is prepared with hot water , but not exceeding the temperature of 70-80 degrees Celsius. Equally important is that the leaves should not be left to infuse for too long, because the tea obtained will be too focused and very bitter . Period ideal brewing this tea is 30-40 seconds , maximum a minute or two .
Green tea has good quality , usually, these flavors , depending on the assortment of leaves used fresh , sweet – bitter taste of nut , vegetal flavor , butter flavor , floral aroma, fruity or ocean.

Benefits of green tea
Asians believe in the medicinal properties of green tea since ancient times , using it to treat drinking a whole range of ailments , from headaches to depression. Researchers say traditional Chinese medicine uses green tea as a natural remedy for at least 4,000 years .
Studies conducted in recent years by scientists bring evidence of the health benefits of green tea . For example , an epidemiological study published in the Journal of the National Cancer Institute in the U.S. in 1992 indicate that participants who regularly drank green tea and reduced risk of esophageal cancer by up to 60 % .
Researchers who conducted the study spoke then of a compound in green tea inhibit proliferation of cancer cells in the body. There are other scientific findings that green tea consumption associated with reduced levels of bad cholesterol in the body.
Disorders in green tea could be a real adjuvant , based on field studies are

Therapeutic secret of green tea lies in the fact that it is rich in catechin polyphenols type , particularly epigallocatechin gallate . The latter is a powerful antioxidant that inhibits the growth of cancer cells and kills them diseased , without harming healthy cells at the same time .
All pigalocatechin is involved in preventing blood clots , extremely important benefit , as long as thrombosis is the main cause of myocardial infarctions and strokes .
The scientific evidence of the last two decades spoke about the positive effects of green tea in weight loss. In November 1999, the American Journal of Clinical Nutrition published the results of a study conducted at the University of Geneva in Switzerland. Researchers found that people who received daily a combination of caffeine and green tea extract burned more calories than those who received caffeine and another placebo-controlled substance .
Green tea contains caffeine in moderation , acting through appetite suppression ( large amounts of caffeine, such as those existing in coffee can cause medical problems , including hypertension and insomnia ) . Polysaccharides and other components in green tea helps maintain low blood sugar levels .
Green tea can even prevent tooth loss ! Natural substances in the tea attack and kill bacteria that cause dental plaque . In addition, it is rich in antioxidants , especially vitamin E, which slows the aging process .

The dangers associated with drinking green tea
Despite the numerous health benefits of green tea, there are some precautions consumers should take into account .
Thus green tea can cause insomnia because of important content of caffeine – 30-60 mg of caffeine for a cup of green tea. By comparison, coffee contains more than 100 grams of caffeine for the same amount .
Another potential problem associated with green tea consumption is possible lead contamination . Environmentalists argue that many botanical products could lead to composition and the plant from which green tea is known for its ability to absorb this toxic mineral twice faster than other species . Moreover , lead absorbed by the green tea plant can accumulate even at the leaf surface .
An experiment the researchers detected the presence of 1.25 micrograms – 2.5 micrograms of lead in green tea bags sold two companies famous in supermarkets. Fortunately , laboratory tests showed that the lead present in the dried leaves was not transferred to the water during infusion , as there were no customers put in danger the toxic mineral.