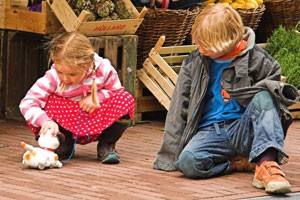 What is intellectual disability
In people with intellectual disabilities are deficient in two areas:
Intellectual functioning – refers to a person’s ability to learn, reason, make decisions and to solve problems. IQ is measured by a special test. The score for a person with average intelligence is 100, while in case of suffering from intellectual disability, it falls below 70.
Adaptive behaviors – these are the skills necessary to carry out normal daily life, such as the ability to communicate effectively and to interact with others and have the ability to self-care.
To evaluate the adaptive capacity of a child specialist will compare with others of the same age. Will be observed behaviors such as the child’s ability to eat, to dress, how the child is able to communicate with others and understand what is transmitted, how they interact with family, friends and other children of the same age .
Intellectual disability affects how seriously only 1% of patients, and if 85% of them, intellectual disability is mild, being presented than the average slowness to learn new information or skills. With proper support, most people in this category will be able to live independently in adulthood.

In children with severe or profound intellectual disabilities there may be other health problems such as seizures, mental disorders, disability motoriu and vision problems or hearing.

Diagnosis
Intellectual disability may be suspected in many cases. In the event that a child suffering from physical abnormalities that suggest a genetic or metabolic disorder, will perform a variety of tests to confirm the diagnosis. These include blood tests, urine, imaging (to detect possible structural problems in the brain) or electroencephalogram to detect hearing or neurological disorders. If not detect any other cause developmental delays, the child will do specific tests for intellectual disabilities.
In the diagnosis of intellectual disability will be taken into account interviews with parents, child observation, and the results from tests of intelligence and adaptive behavior assessment.
After diagnosis of intellectual disability, a team of specialists will assess the strengths and weaknesses of the child in order to determine what kind of support is needed for the child both at home and at school and in the community.

Treatment
For infants and toddlers are available many early intervention programs. Depending on the type and severity of the problem, it may be necessary for a speech therapist, a therapist who specializes in occupational therapy, physiotherapy, family counseling, intervention with special health or nutrition services.
School-age children with developmental disabilities (including preschool) will follow an individualized education program in accordance with their needs.
It is very important for parents to help as many children to develop social skills and maintain a better relationship with teachers in order to consolidate progress in school through practice at home.

Previous ArticleDepression symptoms in children
Next ArticleWhat is albinism?