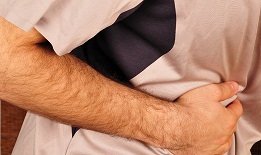 Stomach pain after meals is usual in people who consume too much food, the most common, usually among overweight people and children.Power consumption of a quantity greater than the body can digest causes fatigue and need for sleep habit – sleeping the afternoon – is in many cases responsible for stomach pain. Overeating, unhealthy diet and sleep after eating affects the digestive process leading to many health problems.
Severe pain in the right lower abdomen can be caused by appendicitis. The pain may be accompanied by nausea, vomiting or fever and requires medical attention. Cholelithiasis (gallstones) is another condition that can cause pain in this area, pain may spread to the right portion of the back, right shoulder and chest.
Severe pain in the upper abdomen that is installed after serving a meal or persisting pain 6-12 hours after a meal, may be due to pancreatitis. Pain sensation starts in the upper abdomen and extends on the sides and back area, may be followed by nausea, palpitations or fever.
Very sharp pain is a common symptom of diseases such as pelvic inflammatory disease, heart attack, perforated ulcer, food poisoning or diabetes.
Stomach cramps or pain moderate short and sharp the next meal is caused by intestinal obstruction and vomiting may follow very unpleasant odor.
Accompanied by severe cramping pain in the lower left abdomen are symptoms of diverticulitis.
Stomach pain accompanied by bloating is caused by lactose intolerance.
Short and sharp pain in the presence of bloating and less than 3 bowel movements per week are signs of constipation. If the menu does not include enough fiber daily diet and do not consume sufficient amounts of liquid meals can be followed by constipation and stomach pain.
Fatigue after meals, accompanied by stomach pain and bloating can be a symptom of irritable bowel syndrome.
Stomach problems may be caused by eating plenty of fluids after meals, which dilutes stomach acid. An appropriate concentration of acid help kill unhealthy bacteria and fungi in food and keep your digestive system healthy. By diluting stomach acid, slows digestion and surviving bacteria causing diarrhea in many situations.
Infection by bacteria or viruses can cause gastric pain after meals, when bacteria get into the body, it reacts and tries to remove the infection by diarrhea and vomiting nausea after eating is often common in such situations. Food poisoning, pneumonia or urinary tract infections are caused by bacterial infections.

Indigestion – non-ulcer dyspepsia
Indigestion is defined as a vague feeling of abdominal discomfort and may include:

Symptoms may be aggravated in the presence of depression, anxiety.
Usually, indigestion is not a serious health problem, unless complications arise, such as weight or difficulty swallowing.
Indigestion is a common medical condition and can be caused by:

Food intolerance
Food intolerance or non-allergic food hypersensitivity occurs when the digestive system is unable to produce enough enzymes to digest certain types of food. Body reaction may be delayed up to 48 hours and is manifested by:

The most common forms of food intolerance are:

Gastritis
Gastritis is inflammation of the stomach lining and is accompanied by the following symptoms:

The main causes of the disease are excessive alcohol consumption or prolonged administration of anti-inflammatory drugs (NSAIDs) such as aspirin and ibuprofen. In some cases, gastritis develops as a result of major surgery, bacterial infection (Helicobacter pylori), periods of strong stress.
The condition can be prevented by:

Gastric ulcer
Gastric ulcer was manifested by symptoms of burning pain and nausea, high intensity night in the absence of supply (on an empty stomach), but improved after meal.
Other symptoms:

Infection with Helicobacter pylori is the most common cause of stomach ulcers.
Among the factors that favor the worsening condition is mentioned:

Gastroenteritis
Gastroenteritis is a condition that causes irritation and inflammation of the intestine (gut) and is manifested by:

The most common cause of the disease is viral infection (in 50-60% of cases), but in some cases, bacteria and parasites may be triggering agents. Starting from symptoms of nausea, vomiting and diarrhea, the disease is often confused with food totiinfectia. Severity of the disease depends largely on the ability of the immune system to resist infection.
Gastroenteritis can be prevented by:

The main risk factors are:

The condition can be treated, if necessary, medication or surgery.

Gastric carcinoma – cancer of the stomach
Gastric cancer begins, usually in the cells lining the stomach, over time, can invade deeper stomach wall.
The main symptoms include:

According to studies, the main risk factors in the development of gastric cancer are:

Zollinger-Ellison Syndrome
Zollinger-Ellison syndrome is a rare and complex, characterized by the formation of one or more tumors in the pancreas, duodenum, or both. Tumors cause the stomach to produce excess acid, favoring peptic ulcers, in some cases, tumors are cancerous and spread to other areas of the body.
Syndrome is manifested by:

The causes of disease are still unknown, but sequence development are clear: It starts with the formation of tumors (gastrinom), which in some cases can be malignant (cancerous) tumors grow slowly, but cancer can spread to any part of the body, the more frequently in lymph nodes or liver.
Disease is considering simultaneously treating tumors and ulcers. Excess stomach acid can be controlled by medication.

Other possible causes of stomach pain
Pain in the upper left abdomen can be caused by:

Pain in the right upper middle region may be caused: