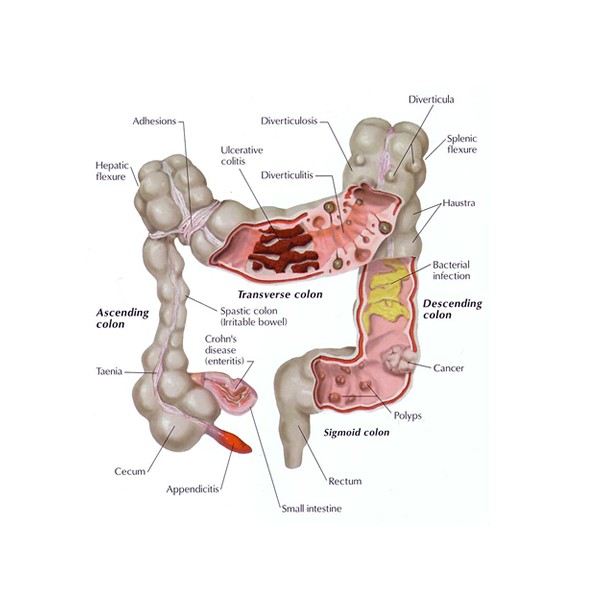 Bowel syndrome or IBS is a disorder of the digestive system quite common problem. The condition is characterized by abdominal pain, bloating, constipation, diarrhea, etc.. Not clear what triggers the disease. Therefore, treatment focuses on symptom improvement for the patient can have a life as normal.
The traditional treatment for colon or irritable bowel syndrome involves medication recommended by your doctor. Often drug therapy has side effects. There are a number of alternative therapies that can help alleviate disease manifestations.

Alternative remedies
Acupuncture – is part of traditional Chinese medicine. Although the results of studies that have examined the effectiveness of acupuncture on the symptoms of irritable bowel syndrome were different, some patients turn to acupuncture to relax muscle spasms, nausea and improve bowel function.
Probiotics and prebiotics – Probiotics are good bacteria that normally inhabit the intestines. They are found in certain foods, such as yogurt, but can be managed and natural supplement form.
Experts believe that the people who suffer from irritable bowel syndrome there is a balance between good and bad bacteria in the gut flora and probiotics can improve some of the manifestations of disease, such as abdominal pain and flatulence.
However, more research is needed to confirm these statements. Unlike probiotics, prebiotics are dietary supplements that are not digestible and can not be fermented by bacteria in the host and that change local flora by stimulating selective growth, but also by stimulating the healthy bacteria in the intestines.
Prebiotics are contained polysaccharides and oligosaccharides, such as fructose, galactose and lactulose. Following research has shown that galactooligozaharidele selectively stimulates Bifidobacteria in patients with irritable bowel syndrome and are effective in relieving symptoms.
Stress management – Stress stimulates the production of adrenaline, which affects muscle rhythmic contractions of the intestines. Many studies have emphasized the direct link between emotional stressors and manifestations of irritable bowel syndrome.
Stress can be improved with regular exercise, practicing yoga postures, and meditation or massage. Yoga, for example, involves achieving both exercise as well as mental relaxation. In addition, it was scientifically proven that yoga is an excellent way to manage irritable bowel syndrome symptoms such as diarrhea, constipation, abdominal pain, flatulence and nausea.
Also, biofeedback is a technique for stress reduction to help reduce muscle tension and stimulates relaxation events useful for the treatment of irritable bowel syndrome.
Hypnotherapy – using hypnosis can be effectively controlled abdominal pain, bloating and bowel contractions can be reduced, and other symptoms of irritable bowel syndrome.
Hypnotherapy has proven to be beneficial for improving anxiety and fatigue. Hypnotherapy involves the power of autosuggestion the patient will be coordinated by a hypnotherapist during a deep state of relaxation. The treatment of irritable bowel syndrome should be used hypnotic induction with progressive relaxation.
Cognitive behavioral therapy – this is a different manifestations alternative approach to managing irritable bowel syndrome. This type of therapy is recommended especially less severe cases of the disease. Cognitive behavioral therapy has been shown to fade discomfort and abdominal pain.
Diet without lactose – intolerant to certain foods could trigger some of the manifestations of irritable bowel syndrome. Patients diagnosed with the disease, which excluded foods containing lactose, the composition of their diet reported an improvement in symptoms. Negative effect it can have wheat, eggs, and foods rich in salicylates and amines. However, this sensitivity to foods varies from person to person.
The research demonstrated that a diet that excludes certain foods will be followed long term will have a negative impact on quality of life of patients and may trigger anxiety disorders. Therefore, in most cases, moderation is the key and if this aspect. It is recommended that those who suffer from irritable bowel syndrome to not eat processed and preserved and try to eat as healthy, especially foods high in fiber (especially if constipation is present).
Ayurveda – is an ancient holistic approach to healing and treatment of irritable bowel syndrome, which aims to rebalance the doshas or metabolic basis to relieve symptoms of irritable bowel syndrome.
According to ayurveda there are some imbalances that underlie most of the cases of irritable bowel syndrome, including: accumulation of toxins in tissues and blocking blood circulation, poor nutrition, improper digestion, nervous system imbalance, increased physical stress and mentally weak immunity and disruption of normal biological rhythms.
With this holistic approach will be encouraged and strengthened the body’s natural healing and self-repair ability not only to cure irritable bowel syndrome but also to prevent the occurrence default installation imbalances and health problems.
Plants – some plants (chamomile, aloe, mint, fennel, ginger, oregano, etc..) May have beneficial effects on the digestive system, whether used in the form of teas, capsules or oils. Among their positive effects include normalization of bowel movements and its smooth muscle relaxation.

One Reply to “Alternative remedies for colon or irritable bowel syndrome”