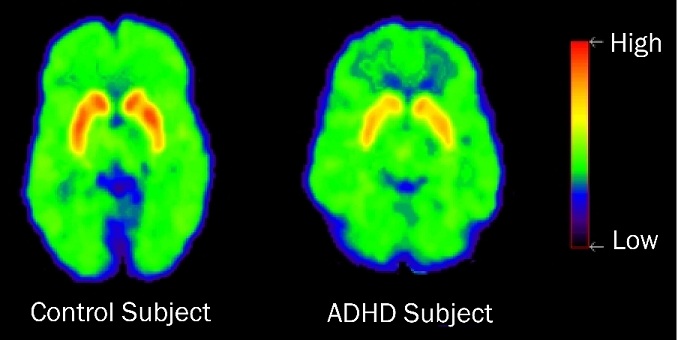 Attention deficit hyperactivity syndrome (ADHD) is a behavioral disorder that is manifested by the child attention deficit and difficulties in carrying out a task.
ADHD is common, begins in childhood but may persist into adulthood.
If not diagnosed and treated properly can significantly disrupt functinoarea social or professional school.

Causes
The exact pathogenesis of the disorder is unknown, but recent research has revealed that most likely is a genetic TDHA (researchers are concerned with identifying genes that predispose to the development TDHA).
Brain imaging studies have provided evidence of the existence of changes in the brain, which supports the theory that ADHD is a neurobiological disorder. They described these neurobiological abnormalities that support the hypothesis of disorder:
– Alterations in brain structure – evidence neuroanatomic
– Disruption of neurotransmitters involved in the control of attention and activity (dopamine and norepinephrine) – neurochemical evidence
– Differences in the activation of brain regions responsible for inhibition mechanisms (frontal lobes), which leads to difficulties in inhibiting emotional reactions, cognitive and behavioral – Neuropsychological evidence.
There etiological hypotheses which claim that exposure in intrauterine life to alcohol, tobacco, drugs and other neurotoxic substances (lead) increases the risk of developing TDHA.
Nutritional theory, according to which the increased consumption of sugar and the addition of food additives (colorings and preservatives) should be responsible for the appearance of hyperactivity was not supported by experimental data. A study by the NIH (National Institutes of Health) showed that a restrictive diet without sugar consumption does not improve symptoms than 5% of children TDHA. Other studies show that there is no correlation between sugar consumption and TDHA.

Research has shown that ADHD is genetically transmitted from parents to children. For the propensity to lead to the emergence ADHD, genetic factors must be correlated with environmental factors (psychosocial), the so-called biopsychosocial context. Parent-child interaction is considered to be a contributing factor. A stressful family environment (family events and particular aspects of its functionality) contribute to the onset of symptoms of ADHD.

Core symptoms of ADHD are:
– Inattention, characterized by poor concentration on performing a task and easy distractibility by external stimuli
– Impulsiveness can lead to child involvement in risky activities without it take into account the consequences
– Hyperactivity / agitation and inappropriate behavior.
During preschool, three characteristic symptoms, inattention, hyperactivity and impulsivity are part of the normal behavior of children. It is therefore difficult to differentiate ADHD from age specific normal behavior. Symptoms become apparent or increased with the beginning of school, because the social and academic requirements apply those skills in children with ADHD who are not their strengths.
Children and adolescents with ADHD have difficulty due to academic disorder symptoms. During this period (6-12 years) expectations of adults (parents and teachers) are becoming larger in terms of independence, autonomy and social functioning. In school are assessed cognitive and socio-emotional abilities of the child.
TDHA can be suggested:
– Notes and low scores on aptitude tests
– Poor organization and planning skills learning act
– Social problems
– Negative self-image and feeling that is rejected by peers.

During adolescence, between 13-18 years, the disorder is relatively stable. However, if no therapeutic intervention problems can persist or worsen. Adolescents with poor school performant inattention will be most evident change or shift in secondary school or college.

In adulthood, symptoms subside, but some may persist causing difficulty concentrating, planning and completion of an activity. Many adults can get away undiagnosed and untreated and presents social maladjustment problems (difficulties in job retention) or affective disorders (depression). However, adaptation of adults with ADHD is better than hyperkinetic children. Most adults with ADHD will have various problems in both family and workplace, shows frequently low self esteem and frustration. Divorce rate of smoking, alcohol or drug abuse is higher in people with ADHD. It is found that the number of high school graduates and / or faculty is lower among those who suffer from ADHD compared with others of the same age. Some adults find that suffer from ADHD only after the diagnosis has been their child.

Hyperkinetic child family is often difficulty raising a child with ADHD can be a challenge for parents. Parents will watch closely compotamentul child and learn to properly respond desirable behaviors. If other malfunctions occur in family life (such as divorce, family violence, alcohol and drugs), they will interfere with the child’s behavior management TDHA.

Comorbidity with other mental disorders

There is ample evidence that shows that ADHD is often associated with one or more mental disorders such as dyslexia, oppositional defiant disorder, conduct disorder, mood disorders (depression) and anxioase.Tratamentul hyperactivity disorder symptoms will help control growth and development enabling normal.

Parents will seek advice from health care in these situations:
– When the senses symptoms of ADHD in a child younger than 7 years
– When ADHD symptoms cause difficulties at school, home and in relationships. These problems are noticed by parents and teachers with the entry into first grade
– When a child shows signs of mental disorders such as depression and anxiety that lasts for weeks or symptoms worsened lately
– When a child shows school failure and behavior problems.
Watchful waiting
During the toddler
Expect vigilance is the best attitude to this age group (under 5 years) as the limit between normal behavior and symptoms of ADHD is very difficult to establish. If parents have observed undesirable behaviors and if after a period of six months where they tried to change the child’s behavior problems have not managed to improve or resolve them, especially if they lead to expulsion from nursery or kindergarten child , will address behavioral specialist for evaluation and treatment.
Adolescent period
Watchful waiting is not recommended at this age. If the child relational problems are found both family and school level, where it presents poor academic performance, it is recommended to seek advice specialistului.Probleme due to inattention may not be significant and be detected only in situations require school change (moving to altascoala, in the transition from primary or secondary school admission) or the environment (moving to another city).
Adulthood
Watchful waiting may not be the best therapeutic approach to ADHD in adulthood. Adults with hyperactivity will try to remember when they started ADHD symptoms, analyze them in the context of major changes occurred and assess whether disorder symptoms affected her decisions in crisis situations in his life. Once identified problems will be manageable and resolved, but if the symptoms cause discomfort, adults with ADHD will require expert advice. Also, experts in the field will make the diagnosis of therapy and will prescribe other mental problems such as depression and anxiety, which are frequently associated with ADHD.

Investigations
Pshiatrie American Association established a set of criteria based on which ADHD is diagnosed. According to these criteria, the DSM-IV manual were described several subtypes:
– ADHD combined type
– ADHD symptoms of inattention dominated
– ADHD predominantly hyperactive / impulsive.
He also described the type specified when symptoms of inattention, hyperactivity and impulsivity are present but can not be put in any of the three types described above.
Medical professionals using well-defined criteria for a diagnosis of ADHD:
– Child history: Father will make a brief description of the socio-emotional, educational and behavioral
– Physical examination
– Completion by parents and teachers of standardized scales and questionnaires for ADHD.
Based on mental status evaluation (assessment vocabulary and speaking skills, clinical assessment of intelligence, smooth or rough driving coordination, evaluation form, content and logic thinking) your doctor will assess whether ADHD behavioral problems are caused by or associated psychiatric disorders by.
In addition, educational assessment will determine deficiencies in written language development and reading and numeracy problems. Testing learning disorders is an important component as the basis for individualized tailored Interventional together into a program deficiencies and needs of the child.
Further investigations will provide evidence to support the diagnosis of medical problems that interfere with development and acquisitions school child can explain symptoms such as:
– Deficiencies of hearing (auditory acuity assessment)
– Visual impairment (visual acuity assessment).
Other useful laboratory tests for diagnosis:
– Determination of lead, history suggests you fail or environmental exposure
– CBC: this may reveal anemia, which can cause apathy and decrease of concentration
– Determination of thyroid hormone thyroid dysfunction highlights affecting attention and concentration ability, but they are most common in adulthood.
– EEG (electroencephalogram) is required for the diagnosis of seizures that may cause alterations in the neural functionality, translated by changes in behavioral plan.
One of the concerns of parents is supradiagnosticului. Scientists and researchers in the field believe the number of cases of ADHD but not due supradiagnosticarii improve evaluation methods and diagnosis (standardized scalelolor appearance).
Behavioral assessment of adults with ADHD is done with WURS Scale (Wender Utah Rating Scale) consists of 25 questions (items) about childhood problems commonly found in this condition. This scale assesses the presence and severity of symptoms in childhood.
Diagnosis precoceSus
Not recommended screening the entire population of children to make early diagnosis of ADHD. But parents who are worried about their child’s difficult temperametul of their poor school performance and emotional development can address poor behavioral specialist, before visiting parents specialist will review the age at which symptoms started, the context in which problems of behavioral triggers, their duration and the impact on school performance and social integration.
Differential Diagnosis
Differential diagnosis in children must exclude the following comorbid conditions:
– Conduct Disorder
– Opposition disorder (oppositional defiant)
– Affective disorders (depression, bipolar disorder)
– Anxiety disorders
– Tic disorders (Tourette’s disorder)
– Substance abuse
– Learning disorders
– Pervasive developmental disorders
– Mental retardation or limit intellect.

Initial treatment
Effective treatment requires an accurate diagnosis and an accurate assessment of the child’s abilities and problems.
American Association of Pediatrics, based on longitudinal clinical study conducted on a group of hyperactive school age children, recommends pairing medication with behavioral intervention. Children receiving stimulant medication showed a significant improvement in symptoms (inattention, impulsivity and hyperactivity were significantly improved).
Drug treatment includes:
– Central nervous system stimulants amphetamine family (dextroamphetamine, methylphenidate) improves symptoms in about 70% of children with ADHD.
May seem paradoxical cerebral stimulant effect, they reduce hyperactivity and impulsivity increasing concentration. Some parents worry that stimulant medications will cause addiction. One of the important findings of recent studies with rigorous scientific methodology is that, in patients with ADHD, psihostimulentele in therapeutic doses, does not cause habituation or addiction, nor exposed to an increased risk of addiction to drugs (during treatment or after in adulthood). However, parents should monitor carefully because treatment administration was reported misuse of psihostimulantelor among adolescents (siblings or peers) and adults from the patient’s family.
The most common side effects of stimulants are loss of appetite, irritability, emergence of tics or Tourette’s disorder, insomnia
– Non-stimulant medication – Atomoxetine is a non-stimulant drug (norepinephrine reuptake inhibitor) administered in the absence of effective incentives brain or adverse effects on them. Atomoxetine is not a controlled substance (non-prescription).
American Psychiatric Association recommended to treat ADHD and behavioral therapy that represents a specific set of interventions that parents and teachers learn behavioral techniques such as system backup modifying undesirable behavior of the child. Children develop problem-solving skills, communication skills and self-assertion.
Counseling children with ADHD and adults in the family was very useful in identifying symptoms of hyperactivity and behavioral problems due to finding strategies for solving them. It is also effective in resolving the state of frustration and overcome stressful situations.
Behavioral interventions may be useful in the management of anxiety and oppositional defiant disorder, common in some children with ADHD….

Previous ArticleCold and flu detailed symptoms
Next ArticleAntibiotics on children