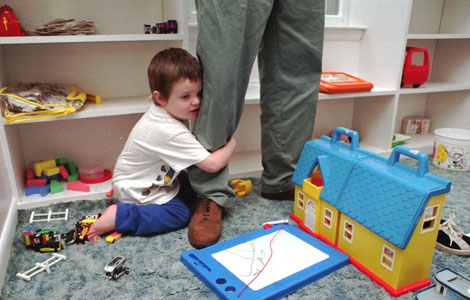 Autism is a brain disorder that often interferes with the ability to communicate and relate with others.
Signs of autism almost everytime develop before the age of three years, although the disease is sometimes diagnosed much later.
Typically, parents become concerned when they see that your son / daughter does not begin to speak and does not respond or interact like other children of the same age.
Usually, children with autism have normal development of speech and can “look” deaf, although audiometry tests are normal.
Autism affects how a child perceives and processes sensory information.
The severity of autism varies. Some require an attendant in almost all areas of their daily life, while others may be able to operate at a very high level and can even go to a regular school.
Although this condition lasts a lifetime and cause varying degrees of social isolation, treatment can make a significant improvement in the lives of people with autism.
Early diagnosis and appropriate treatment led to increased numbers of people with autism are able to live independently when they reach adulthood.

Causes
Autism seems to have a run in families, suggesting a genetic factor. Since people with autism may have a multitidine of events, ranging from individual to individual, scientists believe that multiple genes are involved.
Ongoing research is aimed at identifying those genes.
Some experts also consider that environmental factors may play a role in autism, and although they have studied several such factors, including as vaccines, have not so far found clear cause.
Brain imaging research people with autism have identified abnormalities in certain brain areas, including those responsible for emotion and social networking.
Other studies suggest that people with autism have high levels of the neurotransmitter serotonin, a chemical that sends messages to the brain.
However, these studies are preliminary and research currently being conducted to explain how damage to the brain in autism.

Main symptoms
Severity of symptoms varies greatly from person to person. However, all people with autism have some core symptoms in the following areas:
Social interactions and interpersonal relationships.

Handicapped interest in activities or games

Symptoms of childhood
Symptoms of autism are usually noticed first by parents or others in the first three years of the child’s life. Although autism is present at birth (congenital s), signs of the disorder can be difficult to identify or diagnose during early childhood.
Parents often become concerned when their child does not want to be held, they do not seem to be interested in certain games and you do not start talking.
Also, parents are puzzled about the child’s ability to hear. Often seems that a child with autism does not hear, yet at other times he or she seems to hear distant background noise, like a train whistle.
With early and intensive treatment administered, most children improve their ability to relate to others, to communicate and to self-care as they grow.
In contrast to popular beliefs about children with autism, very few are completely socially isolated from or “living in a world of their own”.

Symptoms during adolescence
During adolescence, the behavior changes. Many teens gain skills but still remains a deficit in the ability to relate and understand others.
Puberty and sexualization can be made with greater difficulty in adolescents with autism than in children of the same age.
Teens have a slightly increased risk of developing depressive disorders, anxiety and epilepsy.

Symptoms in adulthood
Some adults with autism may be able to have a profession and an independent life. The degree to which an adult with autism can lead an autonomous life depends on the intelligence and ability to communicate. Approximately 33% are able to have at least partial independence.
Some adults with autism have a great need to be helped, especially those with low intelligence who can not speak. Partial Supervision (part-time) or complete (full-time) can be assured through therapeutic programs at home.
At the other end of the autistic spectrum disorder, high-functioning adults with autism are often successful in their profession and live independently, although they typically continue to have some difficulty in relating with other people. These people are usually average or above average intelligence.

Other symptoms
About 10% of people with autism have some form of savant skills, talents, special, but limited, such as memorizing lists, calculating dates, drawing or musical talent.
Many people with autism have unusual sensory perceptions. For example, they may describe a light touch as painful and deep pressing can charge as a soothing sensation. Others may not feel no pain. Some may have strong preferences or dislikes for certain foods and concerns from unnatural.

However, children who have a close relative with autism should be monitored closely because they are at increased risk of having autism and other developmental problems.
In addition to evaluating during regular health checkups, these children may be subjected to testing for developmental delays, learning disorders, deficits in social skills and any other symptoms that might suggest the presence of anxiety or depression.
If they develop social disorders, learning and behavioral to a person, no matter what time or at what age occur, the person should be evaluated by a specialist – a psychiatrist or psiholg.

Investigations
It is recommended that screening children to identify autism during regular consultations conducted as monitoring children’s health programs. This policy helps doctors identify signs of autism in an early stage of evolution.
Early diagnosis and treatment can help your child achieve their maximum potential.
If it recognizes the presence of developmental delays in a child, subsequent tests can help the psychiatrist to determine if the problem is related to autism, other pervasive developmental disorder or a disease with similar symptoms, such as delayed in language development or avoidant personality disorder.
Health professionals in recognizing developmental problems (child development) are:

They can do additional testing.
Behavioral assessment
Professionals can use a number of guides and questionnaires to determine the specific type of developmental delay in the child.

In some circumstances can be made more laboratory tests.

Treatment
As early diagnosis and treatment can help your autistic child to develop to their full potential. The main goal of treatment is to improve the child’s overall ability to function.
Autism symptoms and behaviors can be combined in many ways and vary in terms of severity. In addition, symptoms and behaviors people may change over time.
For these reasons, treatment strategies are tailored to each individual and family resources. However, in general, children with autism respond best to highly structured and specialized treatment.
A program that is structured to support parents and improving communication, social, behavioral, adaptive and learning of the child’s life is the most effective.
We recommend the following strategies to help a child in order to improve overall functioning and achieve their full potential.
Training and behavior management. Use strengthening positive self-help and social skills training, with the objective to improve behavior and communication.
Currently there are several types of these treatments, such as:

Specialized therapies
These include:

Most commonly, drugs are used to treat diseases associated, such as:

Specialist in child and adolescent psychiatry may issue guidelines in this regard.
In the media and other sources of information circulated articles on alternative therapies such as treatment with secretin and auditory integration training. When you take into account any type of treatment, it is important to know the source of information and certify that the studies are based on scientifically. Stories of individual success are not sufficient evidence to support the widespread use of that treatment. Attention should be given more extensive studies, well controlled, which may be valid.

Home treatment
Parents who have a child with autism should have a proactive approach to learn about the disease and about her treatment, while scenario and will work with those involved in child care. It is also necessary for parents to take care of themselves so they can cope undergo testing that having a child with autism.

Self-education parents about autism
Parents should ask to contact the psychiatrist or associations that deal with children with autism learn to treat autism and learn how to deal with child events. To show that this type of workout reduces stress and improves family functioning child.
Understanding the disease and its knowledge of the possible expectations is an important part in helping children to become independent.
It is advisable to inform parents about the child’s educational rights. The laws provide certain rights for children with disabilities, including those with autism.
In addition, there are certain associations that provide support to children with autism and their families. Parents are advised to inquire and child protection services.
Learning about autism, parents are also ready for when their child reaches adulthood. Some adults with autism can live “on their feet” can work and can be as independent as others their age. Others need a permanent companion.
Parents are advised to collaborate with others to help them in caring for their child.
Close communication with others involved in education and child care is of great help for family members. The best treatment for children with autism is a team approach and applying a structured program consistently.
Every person who is involved must work together with others in the team to pursue these objectives:

It is important to collaborate closely with those involved in child care. It is also important that the therapist make time to talk with their parents about any concerns.
It is important for parents to take care of themselves. Parents are advised to learn different ways to deal with all the emotions, fears and concerns that arise when they have to watch a child with autism.
Daily challenges and long-term increases faced by much risk parents and other children in the family for depression or other stress-related disorders. The way in which parents cope with these problems affect the other members of her family.
It’s okay to have a hobby to visit other friends and learn ways to relax. Seek and accept support from others.
In addition, therapy support groups for parents and other close relatives are often very useful, those who participate in these groups often benefit from the experience that others share.
Also, pediatric psychiatric doctor may advise parents or other children in the family, in case of problems in life, with children with autism.

Prevention
Until now, experts have not yet found a way to prevent autism.
Assumptions persisted long supported the idea of ​​an association between autism and vaccines made ​​during childhood. However, numerous studies have failed to demonstrate clearly that there is a link between autism and vaccine rubella, mumps and measles (measles). If you avoid immunization of children, they and others in the community in which they live will be at risk of disease is severe, can lead to serious problems and even death.