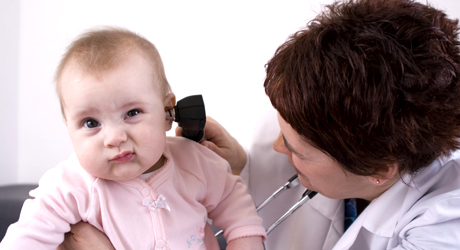 The space behind the eardrum, middle ear, close the auditory system and is empty inside. Natural secretions formed here are removed by a domestic route called the Eustachian tube. In children, it does not always work very well, probably because it is not fully matured and therefore need no resistance and secretions are not removed completely. When a problem occurs risk Eustachian tube fluid accumulation behind the eardrum. Existing bacteria in the nasal passages sometimes multiply easily in the fluid causing infection. Often, after a cold, the nose is clogged and therefore otitis media occurs during or after it.

Symptoms
Usually ear pain and sometimes fever. Some children may have only rarely fever and irritability and may not have any symptoms despite infection. Otitis can be diagnosed by examining the ear with an instrument called “otoscope”. With its direct doctor can see your eardrum, which is red and sometimes bulging due to infected fluid pressure. Serious complications are rare but there. Otitis media can lead to infection of the brain lining (meningitis), the bone surrounding the ear infection or bacterial contamination of blood. Due to the risk of developing these complications, oral antibiotics is fully justified.
Treatment
Antibiotics are usually prescribed for a period of three, five or seven days, depending on their type. Treatment should be followed by your doctor even if symptoms improve or disappear before the end. In general feels attenuation of symptoms within 48 hours of starting the antibiotics. During these first 48 hours the symptoms are likely to persist but that does not mean that antibiotics do not act. To relieve pain or fever may be given paracetamol based on weight or age of the child. Meanwhile the child may again be examined to see if they have changed the antibiotic. Upon completion of antibiotic treatment, the child should be observed to ensure that the infection has been cleared.Antibiotics are needed?

The use of antibiotics has been questioned by those who claim that some infections are caused by viruses and not bacteria. Antibiotics are not effective against viruses, and this is why some people are afraid to use their excess. Some studies show that about 30% of otitis media does not heal by itself without the help of antibiotics.
So 70% can heal itself. The problem is not identified the 30 percent with a simple examination of the ear. Identification is important because untreated otitis media can result in more serious infectious complications.
In some cases, if an older child, some doctors may opt for its supervision until the infection is reabsorbed, not to administer antibiotics immediately. However, if the infection is severe, especially in young children, the doctor prescribes an antibiotic. This choice depends entirely on the situation.

What if infection recurs?The most common complications of otitis media are recurring or persistent infection or constant presence of fluid in the middle ear despite treatment with anibiotice. This fluid lowers the hearing. Result in delayed hearing loss understanding words to all children. If the infection continues to occur despite treatment with antibiotics we have two possibilities: low-dose antibiotics daily for several months (prophylactic treatment) or a small surgery – tympanostomy, performed by an ENT doctor, which consists of introducing the eardrum of a small plastic tube to drain the middle ear from the outside. This tube is used until the natural drainage system of the ear, eustachian tube, mature.
The vast majority of children outgrow this problem and age do not develop any permanent sequel in auditory acuity plan and does not suffer from any other long-term complications from otitis.

Previous ArticleMigraine and headache
Next ArticleHow effective are antibacterial gels?