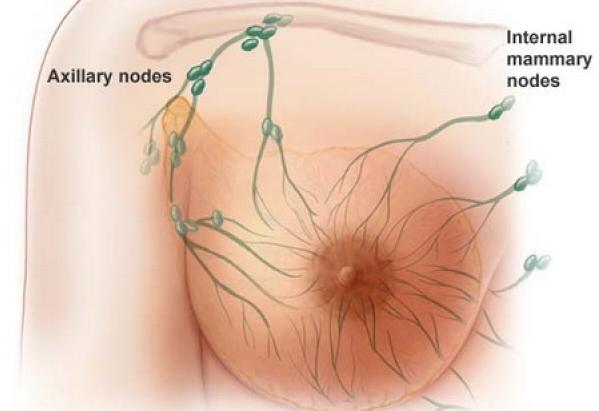 Papillomas is ductal epithelial proliferation with fibrovascular support (true tumors, unlike ductal hyperplasia for which the term is sometimes used papillomatosis) according to the predominant cystic component are chistadenoame, respectively, papillary adenoma, if it develops in the lumen of the dilated a duct are called intrachistice. The most commonly develops in the ducts lactifere large subareolar case in which they are located, may become large and cause nipple discharge, sometimes develop from smaller ducts, in which case can be multiple and localized to the side.
Cysts are the most common “tumors” of the breast. Are related to tumor type papillomas, shows histological framed Apocrine metaplasia (large cysts have a wall composed of apocrine cell layer). Intraoperative they look dark (“blue dome cysts”) can treat and discharge simply because it ever raise the suspicion of malignancy.

Atypical ductal hyperplasia is characterized by the presence of three or more cell layers near the basement membrane in a lobular or ductal unit.

Fibroepithelial tumors
Fibroadenoma is an encapsulated tumor that contains both glandular tissue and connective tissue, it can be present in juvenile and giant forms. The notion of complex fibroadenoma refers to fibroadenomas that shows: cystic formations larger than 3 cm sclerosing lesions, epithelial calcifications, papillary apocrine changes.
Benign phyllodes tumor variant is difficult to distinguish from fibroadenoma, is a variant intracanalicular it. Most tumor is given in areas dense connective tissue, edematous or gelatinous; cysts may occur in areas of necrosis, degeneration, etc.. Sarcomatous transformation may occur. Clinic: occurs in young women, sometimes under 18. The tumor is large, sometimes gigantic heterogeneous consistency which does not change overall, do not adhere to surrounding tissues, no lymphadenopathy, skin is relaxed, shiny can ulcerate and become infected. At mammography appear calcification and necrosis areas.
Treatment: small tumors – involving a resection margin of 1 cm.
For histopathology specified, especially if there are elements malignant biopsy is reexcizeaza the edges. Large tumors or malignant elements – mamectomie simple.
Pure breast adenoma – is very rare, being a pure epithelial proliferation. It has two forms:

Adenoza and sclerosing lesions
Adenoza term can refer to any process of glandular tissue hyperplasia (proliferation ductulilor acini and terminal) in this regard adenoza can be included in the entity called fibrocystic disease, the most common variant is the sclera (adenoza sclerosing), accompanied by stromal proliferation. Another is scar radial sclerosing lesion. Both lesions can be mistaken for breast carcinoma after some authors signify increased risk of developing breast neoplasia.
Mastoza fibrocystic disease (Reclus) is a proliferative lesion that occurs in women around 30 years, but can be seen at any age. It is characterized by: hiperfoliculinemie, hyperthyroidism or thyroid genital hipofunctii.
Macroscopic: multiple cysts of various sizes, clear or cloudy liquid yellow-brown, surrounded by sclerotic tissue. Predominant one of the two components.
Microscope microchiste walled fibrous sclerosis separates them, wallpaper of multiple cylindrical epithelium mitochondria secretory granules, hypo breast tissue or atrophic epithelial changes can give malignancies.
Clinic shows local pain or discomfort, spontaneous or induced, especially during menstruation. Palpation reveals tumor sizes (from a few millimeters up to 2-3 cm) disseminated or grouped, uni or bilateral, mobile, firm, slightly painful, increase in menstrual period. Do not give axillary lymphadenopathy.
Treatment: