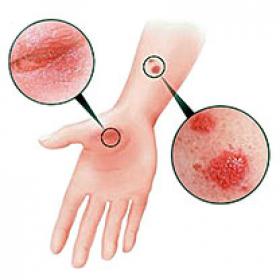 Symptoms
Patients with dermatitis herpetiformis rash usually specific experience in the same region, each recurrent episode. The rash may be continuous or may come and go periodically.
Before blistering, itching produce affected area or, more rarely, burning sensations. The eruption itself include redness and the appearance of small bumps similar to pimples, which contain clear fluid.
Small vesicles occur progressively larger joints, the neck and back ( palms and soles remain unaffected ). Under 10 % of patients experience and bloating, diarrhea and symptoms of malabsorption, while 30 % had iron deficiency and folate.
Herpetiform dermatitis blisters heal, generally within a few days (while the November bumps may appear nearby. Once cured, blisters leave behind small purple marks that remain visible for weeks or even months.
People with dermatitis herpetiformis persistent redness left with permanent areas where blisters usually appear.

Diagnosis
Dermatitis herpetiformis is diagnosed often erroneously confused with the rash caused by drugs, contact dermatitis, eczema dishidrotica ( dyshidrosis ) or scabies.
The diagnosis is confirmed by a simple blood test performed to analyze and IgA antibodies by skin biopsy with direct immunofluorescence, which tracks specific antibody deposits under the skin. Dermatologists typically perform this procedure in office by taking a sample of skin.
Can be carried out blood tests for evidence of iron deficiency and folate, and a endoscopy highlighting villous atrophy.
All these tests should be performed before the patient starts a gluten -free diet, otherwise the results could be compromised. Where previously he started diet without gluten, it may be required to be reintroduced during the consumption of this substance, as only then to attempt a diagnosis for dermatitis herpetiformis.
In 2010, scientists discovered medicine dermatitis sensitive to gluten, a dermatological similar to dermatitis herpetiformis, but not related to immunoglobulin IgA and gastrointestinal symptoms that mimic those of celiac disease specific.

Treatment
Dermatitis herpetiformis responds to the administration of a specific medication and changes in diet taken by the patient.
Substances used successfully in the treatment is diamino -diphenyl sulfone. Dermatitis herpetiformis responds so quickly the drug ( itching completely disappears in 2-3 application ), that it is also a method of diagnosing the disease. However, treatment with diamino -diphenyl sulfone had no effect on intestinal symptoms potential ( celiac disease ), which may accompany the skin blisters.
In addition, it is necessary to follow a strict diet to be excluded gluten for life. This therapeutic approach reduces any associated intestinal symptoms herpetiform dermatitis and the risk of complications. After a gluten-free diet compliance, administration diamino -diphenyl sulfone may be terminated or the dose may be gradually reduced.
Diamino -diphenyl sulfone actually has antibacterial effect, so its role in the treatment of dermatitis herpetiform (not caused by bacteria ), remains unclear. The substance can cause adverse effects on the blood, so it is necessary permanent medical monitoring throughout treatment.
Patients who do not tolerate substance diamino -diphenyl sulfone can replace other treatment options, less efficient : colchicine, limeciclina, nicotinamide, tetracycline, or sulfapiridina sulfametroipiradazina.
Regular health monitoring, blood tests, it is absolutely necessary. Some patients choose to keep the condition under control just by observing the gluten-free diet, which can give results in quite a few cases.