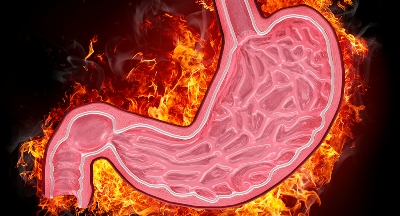 Gastritis is disease represented by inflammatory processes, degenerative, metaplastic, allergic. These injuries can have a self-limited evolution leading to scarring or conversely can lead to serious complications in particular from bleeding or perforation.

Classification
Gastritis is classified, in terms of evolution in acute and chronic. From the clinical point of view they may be asymptomatic or accompanied by specific clinical symptoms. These times can be nonspecific, the diagnosis is difficult to establish in these cases received recognition laboratory investigations such as endoscopy, histopathological and bacteriological investigation of the gastric mucosa.
Acute gastritis is often caused by the ingestion of medications (aspirin, anti-inflammatory – post consumer gastritis NSAID) abuse of alcohol – gastritis ethanol, hearty meals, spices or food difficult to digest. In some cases, installing secondary caustic ingestion such as sulfuric acid, hydrochloric acid, substances that cause wounds on different parts of the stomach lining – postingestionala acute gastritis. In other cases it may be caused by reflux of bile from the duodenum into the stomach, especially after some stomach surgery that favors bilious reflux.
Acute gastritis can be divided into: simple acute gastritis, corrosion and allergic.
Evolution of acute gastritis may be short-lived with rapid trend towards healing after appropriate treatment or after removal proceedings. Neglect can lead to chronic gastritis, acute or severe complications.
Chronic gastritis is characterized by the presence of dyspeptic symptoms lasting felt sick in the upper abdomen and moderate epigastric tenderness. Chronic gastritis has a long evolution usually progressive and may lead in time to gastric mucosal atrophy.
A serious complication of any form of gastritis is represented by bleeding from gastric mucosa, clinical manifestations are different depending on the amount of blood lost – from mild anemia, blood in the stools (faeces) and hemorrhagic shock.
Clinical signs of chronic gastritis is characterized by feelings of pressure and epigastric burning, dull pain permanent, sometimes with dorsal irradiation that can be influenced mainly by the change of position or motion.
Chronic gastritis is often not manifested and discovered by chance. Some medical research has shown that only one-third of adults have a completely normal gastric mucosa, the remaining two-thirds showing signs of gastritis.
When symptoms are present, they are represented at the onset of epigastric pain intensity variable without initial rhythm, usually occurring after meals spicy food after eating more acidic or difficult to digest, alcohol. Pains are accompanied by sensation of bloating, satiety, postprandial vomiting even more rarely.
Some authors argue that a neglected chronic gastritis epithelial dysplasia may be followed by further development of adenocarcinoma. It is therefore recommended approach to serious illness and performing for diagnosis of early endoscopy and histological examinations seriously.
The causes of chronic gastritis still include Helicobacter pylori infection, bile reflux, long-term use of aspirin-type drugs and self-immunity (disease Biermer).
Radiography may reveal thickened mucosal folds and investigation gastroscopy with biopsy will establish the diagnosis of certainty.
Differential diagnosis is made with other chronic diseases such as peptic ulcer upper abdomen, diaphragm hernia, esophagitis, and chronic pancreatitis.

Symptoms
Frequently manifested by a burning sensation in the upper abdomen called heartburn, but it can develop without symptoms.
There are many causes, the most common being represented by alcohol, certain drugs (eg, aspirin, analgesics, NSAIDs – nonsteroidal anti-inflammatory drugs, and the steroids can cause gastric mucosal irritation until gastritis and its complications sometimes even managed sensitive to the usual doses), abuse of coffee, eating food too cold or too hot, Helicobacter pylori infection, ingestion of caustic substances, certain infectious diseases, stress.
In patients with this condition can be seen by specific investigation (radiology and endoscopy), some signs of impaired gastric mucosa and functional signs related to the secretion of hydrochloric acid.

When will highlight the existence of germ Helicobacter pilory in gastric mucosa is given a treatment to eradicate this infection antibiotic amoxicillin associated with metronidazole.
Although these treatment modalities will be required to dispose of regime igienodietetic gastric irritants (alcohol, tobacco, spices).

Prophylaxis
To prevent gastritis, there are some principles that can be applied nutrition and tailored individual needs. It is useful to eliminate sugar and synthetic food additives – the explosion of cases of gastritis in recent years is due in good measure and foods fortified with “E” s, as they can affect digestion, promotes (especially sugar) development of Helicobacter pylori stomach sensitive, while, the entire digestive system and digestive disturbances chain. especially those who are predisposed or already suffering from gastritis should strictly avoid sugar and foods with synthetic additives (primarily those for taste, aroma and coloring ).
We recommend quitting alcohol – regardless of origin or countries – with tobacco it is the great enemy of the stomach.
Sweet, spicy, sour or bitter strong can trigger flares of gastritis through a simple mechanism: intense gustatory stimulation produces a strong secretion of gastric juices that are not supported by sensitized stomach.
Smoking plays an important role in the etiology of gastritis and ulcers – recommend quitting smoking fastest possible if gastric distress.

Biermer Disease
It is more common in women than in men, and especially between 40 and 55 years. It manifests as severe anemia, macrocytic, non-regenerative. It can also be manifested by isolated macrocytosis. This condition is due to a gastric fundic mucosal atrophy evidenced by endoscopy with biopsies. Fundic gland atrophy deprives the body of the normal secretion of parietal cells leading to lack of absorption of vitamin B12 – this can be confirmed by the Schilling test. Vitamin B12 as antianemic will generate serious disorders in all body tissues.
The disease begins with digestive disorders that may precede by years the anemia. During the symptoms of anemia occur three groups: anemia, digestive and neurological.
Anemic syndrome is characterized by pallor associated with jaundice, dyspnea, palpitations, fatigue. Lower limb edema occur, nails are often brittle (brittle) and dry hair. Subfebrilitatea presented by some patients is of metabolic origin and disappears a few days after administration of vitamin B12.
Other symptoms may be vomiting, diarrhea and anorexia.