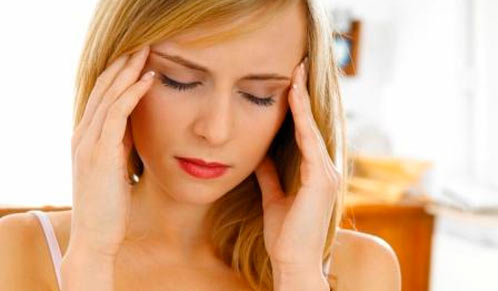 Migraine is a neurological disease organic. A migraine occurs when physiological factors cause vasodilation in the cranial blood vessels, a process which takes place after the release of serotonin.
After a migraine attack, depending on its stage, the person may show different symptoms: blurred vision, sensitivity to light, sounds or smells, feeling sick and vomiting. Migraines can last from several minutes to several hours.

Migraine attack has four phases. Not everyone will experience all four stages and may even vary from one attack to another.
Prodrome phase – Although this phase of migraine attack occurs a few hours or a few days before the onset of headaches, it is considered to be an integral part of the migraine process. Prodrome phase is often a warning sign that migraine is imminent. Among the manifestations of this phase are:

Some people are not always aware of these signs or they may confuse the triggers of migraines.

Aura – This involves the occurrence of one or more focal neurological symptoms. This is experienced by approximately 20% of migraine sufferers, although not present any specific signs for each migraine attack phase. This phase occurs just before the onset of headaches, and in some patients may overlap with headaches. Among the manifestations of this phase are:

Headache – This stage is characteristic of migraines and is found most often in most people who have migraine attack. Headache is a symptom which most of those who suffer from migraine, go to the doctor for advice. Usually, headache common in migraine has the following characteristics:

Also headache may be accompanied by other symptoms that intensify. Among these, the most common are met:

Other events that may be found in this phase are:

Phase postdrome – postdrome or resolution phase follows the headache and may persist even up to 48 hours. Many of the initial events that occur during the prodrome phase or phase headaches. Usually postdrome include:

A small percentage of those who suffer a migraine attack feel energetic, euphoric and can return to normal activities immediately.