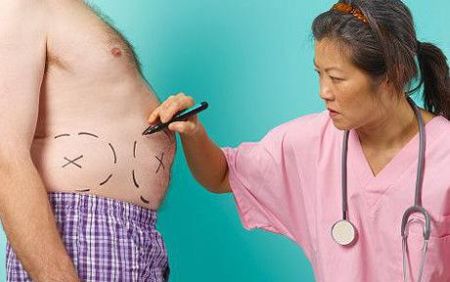 Bariatric surgery
This type of surgery is addressed to certain categories of persons who fall into the following requirements:

In general, doctors surgically intervene in people who are unable to lose weight through lifestyle changes and drug treatment aimed at reducing the number of kilograms. Some doctors ask their patients to make an effort and little to lose weight before surgery.

According to type of surgery
Before surgery support weight loss involving any person will be subjected to an evaluation process that includes various tests, analyzes, and advice. The latter will take into account all individual needs and preferences of a person to choose the best type of bariatric surgery.
Preparing for surgery
Training will depend on the specific procedure and will include blood tests and various screening tests. Avoid using products containing aspirin and herbal supplements at least one week before surgery. Before surgery in 24-48 hours will drink only clear liquids. Patient intravenous line will be installed which will be given painkillers and sedatives. After it is anesthetized and a tube will be inserted into the airways to help them breathe during surgery.

Surgical procedure
The surgeon will use either the open or laparoscopic surgery for gastric bypass surgery.

After surgical procedure
In all methods of bariatric surgery, the surgeon will close the incision using stitches or surgical staples. Intravenous line and the breathing tube that will be removed during the procedure. The patient will be monitored and will be given painkillers. Following laparoscopy scars are smaller than those produced by open surgery, recovery time will be shorter and there is less chance of complications occur. Over 90% of gastric bypass operations are done by laparoscopy.

The feeding after surgery
For a day or two after surgery will drink small amounts of clear liquids, then follow denser liquid. For three to four weeks will consume small portions of food, mashed. From the second month, it will eat soft foods, easy to chew. After three months will resume regular diet. In any case, the patient will not be able to eat large portions.

How to lose weight?
In some cases, weight loss is significant: even pound every two days during the first three months. The combination of surgery and malabsorption shrinking the stomach produces greater weight loss than choosing one of the procedure. Sufferers gastric bypass surgery lose about two-thirds of their excess weight over the course of two years.
After a sudden weight loss could be required surgical removal of excess skin.

Health Benefits
People suffering from hypertension, diabetes or other health problems caused by the excessive number of kilograms can see their improvement or disappearance, immediately losing weight. With weight loss will improve and the general condition of those who suffer from arthritis and sleep apnea: will see an improvement in joint pain, breathing disorders and resistance involved in some physical activities.

Risks of gastric bypass surgery
All surgeries involve some risk. If bariatric surgery, the risk of death is less than 1% and serious complications are rare. To avoid complications, it will go to medical after surgery, follow exactly diet and medical advice for a new lifestyle.

Complications after surgery
Those who supported bariatric surgery may develop the following complications:

Dumping syndrome
Bypass surgery can cause rapid movement of stomach contents into the small intestine. Symptoms include vasomotor disorders: nausea, weakness, sweating, faintness and occasional diarrhea after meals. To avoid these symptoms will follow dietary recommendations recommended by your nutritionist.

Deficiencies and supplements
After surgery, where many of the patients is reduced absorption of vitamin B12, iron and calcium. The more extensive surgery with both these deficiencies nutritional risk is higher. With food supplements will increase the intake of these nutrients and will prevent anemia and osteoporosis. Most people require careful monitoring and lifelong use of special foods and medications.

Adapting to a new life
Following surgery weight loss, emotions are different. Some people are happy and excited to begin to lose weight. Others will feel frustrated or overwhelmed by the changes you have to make in your diet, lifestyle or physical activity alleged.