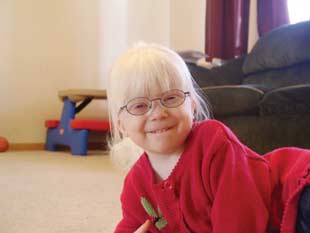 Albinism is part of a group of genetic disorders. Production is characterized by low or no pigment called melanin. Type and amount of melanin in the body produces determines the color of skin, hair and eyes. Most people with albinism are sensitive to sun exposure and show an increased risk of developing skin cancer.Melanin plays an important role in the development of the optic nerve. Because of this, all forms of albinism causes eye development and operation problems. Although there is no cure for this disease, sufferers of this disorder can take steps to improve vision and to avoid prolonged exposure to sunlight. Albinism does not limit intellectual development, although people with albinism often feel socially isolated and can be discriminated.

Symptoms
Signs and symptoms of albinism are usually, but not always, apparent to a person suffering from this disease in the form of changes in skin tone, hair and eyes. Regardless of the effect it has on the appearance of albinism, all people have vision problems.
Skin
The easiest, albinism is recognized through the skin, a milky white. Skin pigmentation can vary from white to the parents or siblings without albinism. In some individuals with albinism, skin pigmentation never changes. For others, melanin production can begin during childhood or adolescence increase, resulting in small changes in pigmentation.

By sun exposure, some people may develop:

Hair
Hair color can range from very white to dark brown. People in Africa and Asia who have albinism may have hair color: blonde, red or brown. Hair color can be monifica since early adulthood.
Eyes
Eye color can range from very light blue to brown and may change with age.
Due to lack of pigment of the iris, eyes become translucent. This means you can not fully block light entering the eye. Therefore, light colored eyes that can sometimes appear reddish in some angles of light. This is explained by the fact that the reflected light to look in the back of the eye and passing back through the iris – look similar to the red-eye effect that occurs in a photo.
Visual signs

Signs and symptoms of albinism that occurs in the eye function include:

When to see a doctor
If your child‘s hair or skin pigment at birth – as happens often in infants with albinism – your doctor will do an exam and ophthalmology will closely follow any changes of pigment.
For some babies, the first sign coincides with nystagmus manifestations, especially in situations where the type of albinism have little effect on pigmentation or if the family rarely there are cases of albinism.
If your baby regularly move eyes horizontally (nystagmus) talk to your doctor.
Ask your doctor if you develop frequent nosebleeds, chronic infections, bruising. These signs may Hermansky–Pudlak syndromes indicate the presence or Chediak-Higashi.

Causes
This condition is caused by a defect in melanin metabolism and is characterized by an absence of this pigment that protects the skin from solar radiation. Melanin is produced by melanocytes, which are found in the skin and eyes. A mutation may result in lack of melanin production or a low values.
In most cases of albinism, to manifest symptoms, a person must inherit two copies of a mutated gene – one from each parent. If the person has only one copy of the disease will not develop.
Impact of mutation on eye development
Whatever genetic mutation is present, vision impairment is a common feature in all cases of albinism. This is caused by poor development of nerve pathways from the eye to the brain and normal development of the retina.

X-linked ocular albinism – assumes a genetic mutation on chromosome x. Therefore, meets almost exclusively in males. People who suffer from ocular albinism have developmental problems and visual disturbances occur. However, hair color, eyes and skin is usually normal or slightly lighter than the other members of the family.
Hermansky–Pudalk syndrome – a rare form of albinism is caused by mutation of at least one of the seven genes cela. People with this disorder have signs and symptoms similar to those of albinism oculocunatat, and lung diseases, intestinal, and blood diseases.
Chediak-Higashi syndrome – a rare form of albinism is caused by a mutation in a gene on chromosome 1. Signs and symptoms are similar to those of oculocutaneous albinism. The hair is usually brown or blond, with silvery sheen, and the skin is yellowish white to gray. People with this syndrome have a disorder of white blood cells, resulting in susceptibility to infection.

Tests and diagnosis
A full diagnosis of albinism physical examination will include a description of changes in pigmentation, history and thorough examination of eye pigmentation. Pigmentation history includes a comparison of your child pigment that of other family members to determine the condition your doctor may request information about any changes you have observed in hair color, skin or eye your child a doctor ophthalmologist will examine in detail the health of the eyes.
The exam will include an assessment of potential nystagmus, strabismus and photophobia. For this purpose use a device to examine the retina and to determine if there are signs of abnormal development. Also, you may need electroretinogram to measure brain waves produced when light shines into the eye, which may indicate the presence of optic nerve abnormalities. If one eye is affected of your child, the cause may be other than albinism.

Treatments and medications
Because albinism is a genetic disorder, treatment options are limited. Most likely, a child with this disease will need prescription glasses that will help improve vision and you will need to consult an ophthalmologist annually.
Although albinism rarely, surgery may be a treatment option, the ophthalmologist may recommend surgery to minimize nystagmus (the optical muscles). Surgery to correct strabismus may be less obvious affection, but they will not improve their vision.
The doctor will do annual assessment of the child’s skin to detect any damage that may lead to skin cancer. Adults with albinism need annual eye exams and skin throughout their lives. Hermansk–Pudlak syndrome people and Chediak-Higashi requires periodic professional care to prevent complications.

Lifestyle and home remedies
You can help your child learn self-care practices that should continue into adulthood:

symptoms
Signs and symptoms of albinism are usually, but not always, apparent to a person suffering from this disease in the form of changes in skin tone, hair and eyes. Regardless of the effect it has on the appearance of albinism, all people have vision problems.
skin
The easiest, albinism is recognized through the skin, a milky white. Skin pigmentation can vary from white to the parents or siblings without albinism. In some individuals with albinism, skin pigmentation never changes. For others, melanin production can begin during childhood or adolescence increase, resulting in small changes in pigmentation.