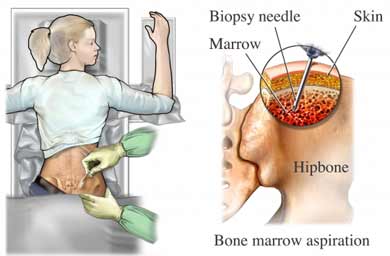 A biopsy is a procedure in which a small sample of tissue harvested from one part of the body that will be analyzed and examined under a microscope to diagnose an illness.More advanced tests can confirm the presence of a tissue sample cultures of viruses or other germs. Usually biopsy is used for cancer, but has other uses.

Preparing
Most biopsies do not require any preparation person to bear. If it is necessary to harvest a sample of the membrane covering the lungs or gastrointestinal tract, will not eat before at least 12 hours to reduce the risk of vomiting.

Procedure
The exact procedure varies depending on where the biopsy will be done. Biopsy can be done through the skin (percutaneous) or inside the body in the area that could be a problem. Skin biopsy may be closed or open. In these cases biopsy will be performed with local anesthesia if minors involved a lesion close to the skin or general anesthesia if tissue sampling is difficult. If closed procedure, insert a needle through the skin, especially in the area of ​​biopsy and tissue will yield some aspiration. This technique requires only local anesthetic.
Internal biopsy requires that the doctor can see an organ or body part of which will be taken tissue. This will be done using an endoscope (flexible tube having one end one camera that will transmit images on a screen when the tube is inserted into the body). The endoscope will come between body organs and allows the doctor to view the internal areas of the body that could not see before discovering this technique than with open surgery. To guide biopsy of certain organs (when using special needles are inserted through the skin directly to the organs) are required CT scan or ultrasound.

Diagnosis
When tissue is removed, it is usually taken to a pathological laboratory where it will be covered with wax is not damaged. The sample is then cut into thin pieces and each will be colored with a special color, so they can be viewed easily. You will then be mounted on a microscope slide.
Pathologist will try to observe normal and abnormal cells. If abnormal cells are present, it will try to establish their evolutionary status. In some cases, such as during surgery, the tissue is examined immediately after being removed. Thus, the test results will be available for the surgeon a few minutes after the biopsy was completed. However, in some cases, the results could be given one or two days later.

Types of biopsies
There are several different types of biopsies. Almost all of them involve using a sharp instrument to remove a small amount of tissue. If the biopsy will be the skin or other sensitive areas will involve local or total antestezia.

Here are some types of biopsies:

When biopsy is needed?
Biopsies are often made ​​in certain areas of the body because it is difficult to know if a node, for example, is benign (not cancerous) or malignant (is cancerous ). Liver or kidney biopsy may be performed when a body is sick and requires a more detailed diagnosis before determining appropriate treatment.

There are risks and complications?
A biopsy is a relatively simple and safe procedure. In the area where the biopsy will be less pain may occur after anesthesia will pass away, but the discomfort usually lasts a day or two. Bleeding may be present and may be a slight discoloration under the skin, but they get better pretty quickly. Bleeding and infection may be possible after any procedure, but they will be rare during the biopsy. Some of the organs can be perforated during the biopsy and surgery may be needed, but this situation could be seen rarely.

What to expect after a biopsy
Biopsies vary greatly depending on how difficult it is to obtain tissue. The medical term for this is “invasive”. A minimally invasive biopsy (eg most skin biopsies) can be performed in the doctor’s office, even when the injury is discovered. There will be local anesthesia and the procedure is almost painless.
Invasive biopsies will be in the hospital, the department of surgery. It will make a special appointment for surgery, local anesthesia or will be complete, and after biopsy will recommend medications to relieve pain and discomfort. Local pain may persist for several days.

What happens after the biopsy?
After the tissue is collected and stored will be provided a pathologist. Pathologist is a doctor who specializes in diagnosing conditions that are based on analysis of various tissue samples. The specialist will examine the sample under a microscope. After you identify the type of connective tissue cells, form and how they act, in most cases a pathologist can diagnose a problem.

Tags: about about health problems biopsy biopsy procedure health medical tests preparation of biopsy problems type of biopsy what happens after biopsy what to expect after the biopsy when biopsy is needed

Previous ArticleMedical tests for people over 30 years
Next ArticleWhat is blood?